What happens after death?

The Bible clearly describes, as Jesus does here, death as being similar to a state of dreamless sleep.

Let’s first read Jesus’ own words: “‘Our friend Lazarus sleeps, but I go that I may wake him up.’ Then His disciples said, ‘Lord, if he sleeps he will get well.’ However, Jesus spoke of his death, but they thought that He was speaking about taking rest in sleep. Then Jesus said to them plainly, ‘Lazarus is dead’”
(John 11:11-14 NKJV).

The Bible clearly describes, as Jesus does here, death as being similar to a state of dreamless sleep. We are in an unconscious state until Jesus brings us to life in the first resurrection at the end of time. (See 1 Thessalonians 4:14-17.)

Here are a few more passages that directly deal with this subject:

“For the living know that they will die; But the dead know nothing, And they have no more reward, For the memory of them is forgotten. Also their love, their hatred, and their envy have now perished; Nevermore will they have a share In anything done under the sun. … Whatever your hand finds to do, do it with your might; for there is no work or device or knowledge or wisdom in the grave where you are going” (Ecclesiastes 9:5,6,10 NKJV).

“So man lies down and does not rise. Till the heavens are no more, They will not awake Nor be roused from their sleep (Job 14:12 NKJV).

What about near-death experiences? These need to be tested by the Word of God. “To the law and to the testimony: if they speak not according to this word, it is because there is no light in them” (Isaiah 8:20). But science gives a good explanation. Near-death experiences often occur when the individual has suffered great trauma, as in an accident, or their physical condition is deteriorating and they are heavily medicated. In either case, the mind can create images that could be interpreted by some as heaven or hell. Christians who are near death are often thinking of heaven and Jesus. It is only natural that their mind creates an experience related to their thoughts. All these sorted dreams and images occur before death.

Unfortunately, the devil has manipulated thousands to believe this occurs after death, but it is contrary to God’s Word. Satan will do all he can to turn people from the Bible.

ARE YOU GRIEVING? HERE ARE 9 BIBLE VERSES TO COMFORT YOU … 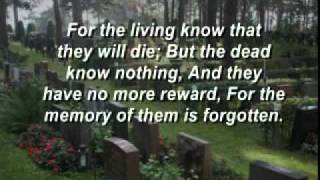 VBS 13 What Happens After Death? Part 1 The First death